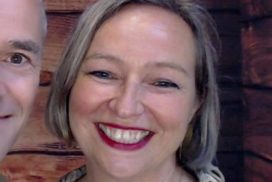 I was asked to tell you about my experiences being the crisismanager and flu commissioner for Belgium and and highlighting the communication …uh… aspects.

In Belgium they chose to appoint a non-politician to do that. And I have no party affiliations and that makes things a little bit – at that time at least – a little bit easier because you are not, you are not attacked politically. Majority / minority – that doesn’t come into play and that was a huge advantage.
The second advantage is that you can play in Brussels the completely naive guy and would get a lot more done than you would otherwise be able to do.

You have to be omnipresent that first day, or the first days so that you attract the media attention …uh… you make an agreement with them that you will tell them all and they call you, you pick up the phone. When you do that then you can profit from these early days to get complete carpet coverage of the field and they are not going to search for alternative voices there.
And if you that, that makes things a lot easier.

However, talking about fatalities is important because when you say this, people will say “Wow, what do you mean? People die because of influenza?”
And that was a necessary step to uh take. And of course, a couple of days later the first H1N1 dead in the country and the scene was set and it was already talked about.
And then you had to pick uh who is going to be vaccinated first